R107th Heaven! – a Power Roof Installation for your SL 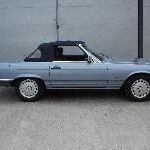 The R107 SL is rightly regarded as the iconic classic Mercedes of the 1970’s and 80’s. It has the style, character and content to appeal to just about everybody. Having the longest production run of any Mercedes car at 18 years it was inevitable that updates would be made during its life, and Daimler-Benz succeeded very well in keeping it abreast of technical innovation right to the end in 1989. Except it never had a power operated soft top! 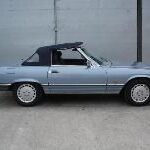 The manual soft top is superbly engineered, and if kept well adjusted is easy to operate. It is fairly heavy however, and is the one thing which puts some people off the car. Many R107s have their hardtops permanently in place for this reason, which is a criminal waste of the car’s best feature. 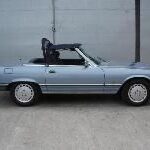 An American company spotted the need in the early 80’s, and created a superbly engineered electro-hydraulic installation to add power operation to the factory soft top. Two British companies became approved agents and successfully installed the system to thousands of SLs throughout the UK and Europe, in many cases for Mercedes-Benz dealers. 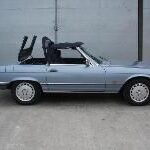 The system was so well designed that Daimler-Benz themselves are thought to have examined one prior to designing the power roof mechanism for the R107’s successor, and the similarities are most apparent. We occasionally manage to purchase cars with original systems in place, and they have always lasted the course very well, however the systems have been unavailable for many years. 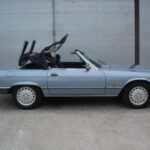 In conjunction with one of the original installation engineers we have now found suppliers for the hydraulic, electrical and electronic components required to match the original spec. The result is that Cheshire Classic Benz can now fit power operated soft top mechanisms to R107 SL’s. The system comes with a two year guarantee. 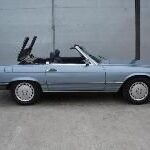 The system is visually undetectable except for an extra switch on the console and a small box in the boot. The driver is still required to latch/unlatch the front catches, but all other operations including latching/unlatching and raising/lowering the back of the hood, opening/closing the hood compartment and raising/lowering the hood itself are automatic and sequential. 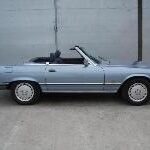 The whole operation takes about 25 seconds, and can be completed without leaving the driver’s seat.

UNFORTUNATELY DUE TO SUPPLY PROBLEMS WITH CERTAIN COMPONENTS WE ARE UNABLE TO OFFER POWER SOFT TOP FITTING UNTIL FURTHER NOTICE. 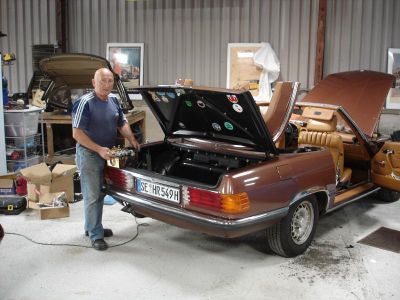 A power soft top being fitted in our workshop for a customer from Hamburg, Germany