Every model we sell has gone well past the bottom of its depreciation curve and is climbing nicely up the other side. We were reminded of this by an article in the Autocar 22 September 2010 issue, highlighting the crippling depreciation suffered by new car buyers.
They quoted the example of a basic Vauxhall Zafira 1.6i, which depreciates by £56 per day, and an Audi A8 4.2 TDi Quattro SE which drops an eye watering £185 per day; more than 50% of its value in six months!

In the same Autocar issue, in a report on their long term test Lexus RX450h hybrid 4×4, they revealed that the total actual depreciation of their car over their 12 month period of ownership was £9040. Set against the 15,000 miles they covered this works out at over 60p per mile. That’s before you even think about putting fuel in it!

Having done all their depreciation in the hands of the first owners, the Mercedes of our favoured era are unlikely to lose much value from now on, and most models have been showing a significant upward trend in recent years. Over several years, unless you cover a huge mileage, you should certainly break even or even show a good profit. 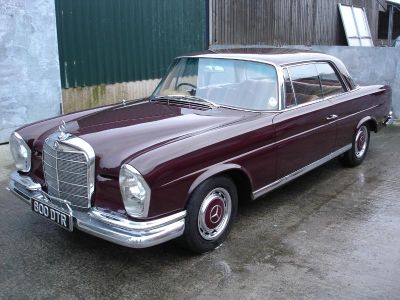 Following the easing of restrictions on business activity from 1st June we are now once again open to visitors by appointment. In line with UK Government instructions we are applying strict social distancing rules and sanitisation of surfaces in between visitors. Apart from our own personnel a maximum of two customers, who must be from the same household, will be permitted on the premises at any one time. We will not be able to offer test drives until further notice.

We have uploaded walk-round videos for most of our "In Stock" cars, and the others will be done shortly. Access them from the individual page for each car.

This website stores cookies on your computer. These cookies are used to collect information about how you interact with our website and allow us to remember you, as well as improving your browsing experience.Accept