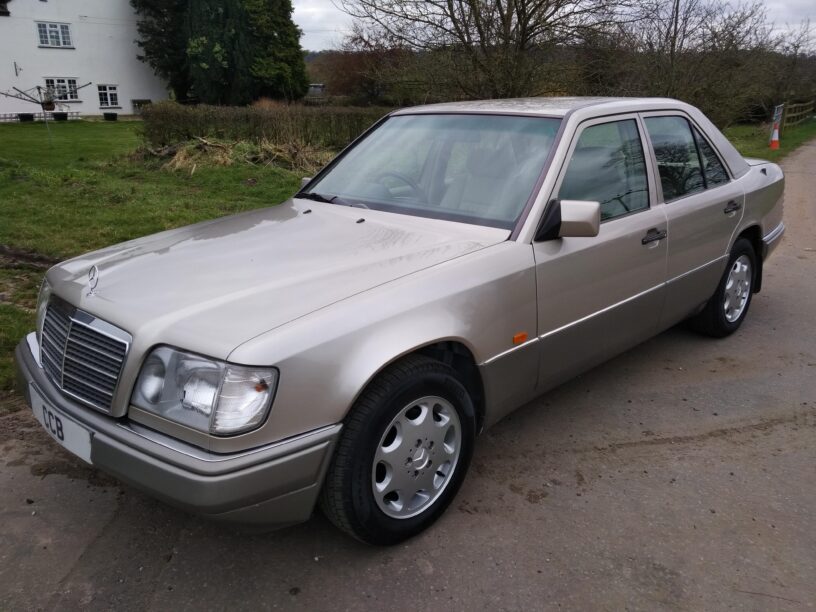 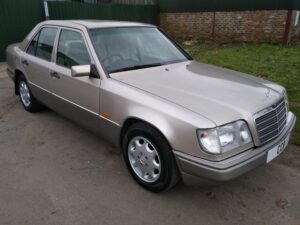 This car is representative of a model that was once quite numerous on UK roads, but which is now, at 26 years old, very rarely found in collectable condition thanks to the hard life that most of them endured in later years. It is a facelift model with the more subtle grille than the earlier cars, body coloured bumpers and the streamlined plastic ‘Sacco boards’ along the lower side panels.

It is in beautiful condition throughout, having been pampered for its entire life by a small number of owners, all of whom have looked after it properly and used it very sparingly.

The very pale gold/bronze paintwork, together with the cream interior add to the classic style and look absolutely right for the period. In that era Mercedes cars were still very much the conservative choice for successful practitioners in the professions who wanted it to be known that they had ‘arrived’, but wanted something a little different from the models offered by the prestige domestic manufacturers. 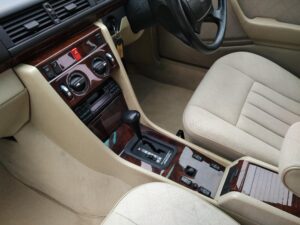 It was supplied new by the well-known Portmann Mercedes-Benz dealership of Manchester in September 1994 to a gentleman who lived locally. He kept it for eight years, covering under 20,000 miles in that period. During his ownership it was also registered to two other family members at the same address, presumably for tax reasons, and there is a signed explanatory letter to this effect in the document file.

In 2002 it passed to another Greater Manchester resident who kept it until 2004, taking the mileage up to around 40,000. It then went to a gentleman in Lancaster who kept it for three years and increased the mileage to around 52,000.

In 2007 it was acquired by a lady on the Isle of Man. Despite being registered there it did hardly any miles during the eleven years she owned it, only coming out very occasionally for short runs and periodic maintenance.

In 2018 a good friend of ours, who is a member of the Mercedes-Benz Club and successful concours competitor, acquired it from her with the intention of using it as a show car. Unfortunately he has now had to give up driving due to a medical condition, so we were fortunate in having the opportunity of buying it from him. 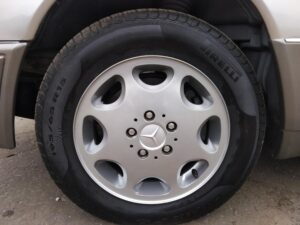 The service book contains four stamps from the supplying dealer, two from a well respected independent Mercedes specialist in Manchester and one from a Ford dealer near Lancaster. We have the invoices for most of these, and many others for general repairs and maintenance. We also have all MOT records back to 2002 and the new car order forms and invoice in the sum of £28,000.

Good W124 saloons are becoming very sought after now, as the supply of well kept low mileage examples is virtually exhausted. This one will become a treasured possession for its new owner and will be widely admired wherever it goes. It drives absolutely beautifully, and gives a rare opportunity to understand why these cars were so highly regarded when new.