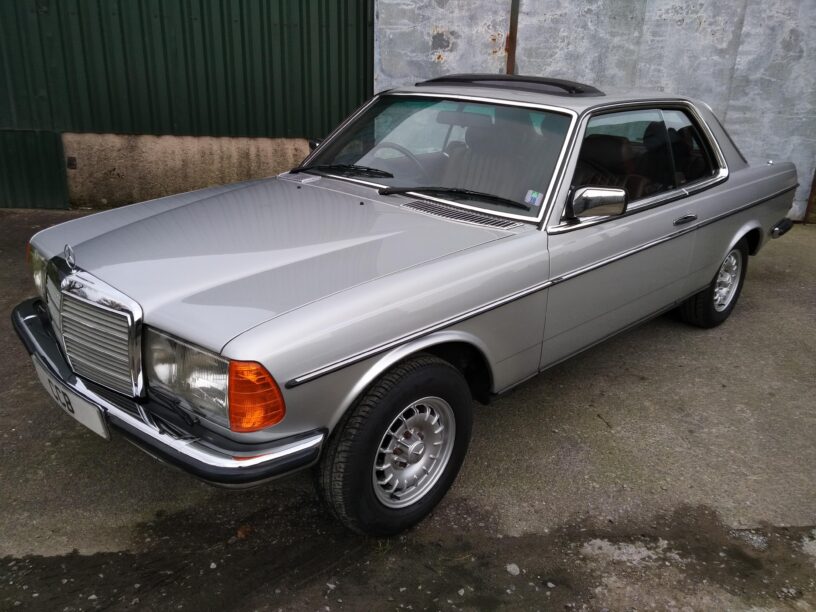 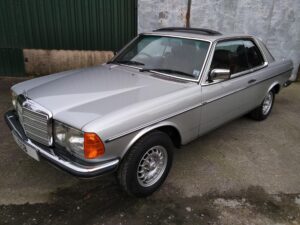 This is a gorgeous example of the W123 coupe which has been treasured by each of its three owners, who all knew exactly what care and attention is required to keep a car in top condition. At 37 years of age, and with an average of under 1,300 miles covered per annum, it is in better condition than most cars a tenth of its age and it drives wonderfully. It is presented in a superb colour scheme for the period and looks very elegant. The Astral Silver is a much softer hue than the later Brilliant Silver and it contrasts perfectly with the unmarked dark red interior.

It was supplied new in September 1982 to UK specification under the British Forces Overseas tax free purchase system. The purchaser was a decorated Royal Navy Surgeon Captain based at the BAOR military hospital at Münster in Germany. He kept it for 21 years until 2003, having retired from active duty in 1985 and brought the car back to his home near Portsmouth. By the time he sold it he had covered around 23,000 miles. 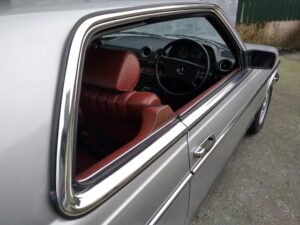 In May 2003 it was sold by a well known Southampton Classic Car dealer to a gentleman in Surrey who kept it until 2012. During his nine years of ownership he took the mileage up to 34,000.

In April 2012 we sold it to its third and latest owner, a Mercedes Club member whom we know very well who lives near Derby. He has used it solely as a ‘special occasion’ car for shows and holiday trips, including several trips to Italy, and has only added around 14,000 miles during his seven years of ownership. It has won several concours prizes during his period of ownership, including Best Coupe in Show at the 2012 MB Club W123 day, out of approximately 18 coupes present. He is now thinning out his collection, so it is once again available to a new owner. 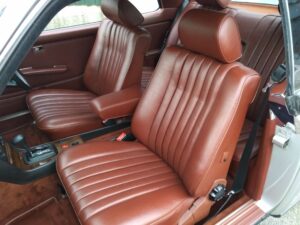 In the service book there are five service stamps from Mercedes-Benz dealers in Germany, two from the dealer who sold it to its second owner, one from ourselves before we sold it to its latest owner and a further eight from Mercedes-Benz dealers in the UK, in addition to many stamps for brake fluid and coolant renewals. It is almost unique as a W123 in that it has very seldom gone outside the MB franchised dealer network for servicing right upto the present day. In addition to the above we have most of the service and maintenance invoices right back to 1985 and every old MOT certificate back to 1990.

This is a rare chance to acquire an immaculate and superbly maintained W123 coupe now that most of the remaining ones are tired and worn. Regardless of whether the new owner keeps it as a weekend and holiday treat, or uses it sparingly as an everyday car, it will deliver many years of pleasurable returns, far in excess of its modest purchase price.

We have carried out a comprehensive mechanical check of the car before sale. Any significant faults found have been remedied, and any required maintenance will be carried out before handover. A schedule of this work will be supplied with the car, along with our own warranty, details of which can be supplied on request.