This is one of the most desired Mercedes models of the 1960s, beloved of film stars and the very wealthy when new, and a lasting style icon which shows most modern cars up to be passing fads and slaves to ever changing fashion. The flowing lines of its Paul Bracq designed coachwork are seemingly even more beautiful now than when it was new, and it is presented in a colour scheme which shows it off to perfection. Few models from any maker, old or new, have anything like its presence.

This example was ordered new by a veterinary surgeon from York, who kept it for 11 years until 1977, by which time it was showing its age somewhat. It then went to another gentleman in York who was a chauffeur at the Rowntrees chocolate factory. He used it as an every day car for some years while carrying out a “rolling restoration” as time permitted, but eventually took it off the road to do a proper full restoration. We have a ring binder full of parts invoices including things such as new front and rear wings, boot lid, stainless steel exhaust, fuel pump, brake components, suspension components, ignition components, starter motor, alternator, head gasket set, top end engine overhaul, unleaded conversion, headlining, hubcaps and trim rings, body mouldings, chrome cill covers, all rubber seals, new brightwork, full rechroming, glass, and hundreds of hoses, clips, clamps, grommets, gaskets, fasteners, nozzles, seals, bushes, filters, escutcheons, mountings, coverings etc. The car was also treated to a bare metal repaint, full undersealing and refurbishment of the interior. 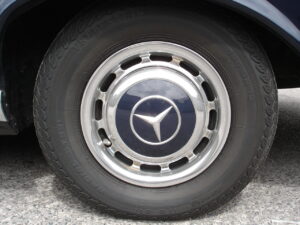 The restoration was done gradually as time and funds permitted, with no expense spared, and was not finished until 2009. Unfortunately by that time the owner was suffering poor health which prevented him driving any distance and had retired from work. As a result the car spent all of its time in the heated garage at his home. We purchased it in August 2015 when it was realised that he would not drive again, and a tearful parting ensued after Pete had taken him on a last drive around York in it.

We purposely did not put it up for sale for a while as, having hardly been used since the restoration, it was something of an unknown quantity in terms of reliability. We therefore wanted to get some serious miles under its wheels before putting our name to it. In the time we owned it we covered around 2,000 miles in it, including the initial trip from York to Macclesfield, a 1500 mile round trip to the Laon Historique Classic Car event in France, The LAC Manchester-Blackpool classic car run and a lot of local running about. Apart from a few tiny hiccups, easily remedied, it performed faultlessly in both high speed running and heavy traffic. It was an absolute joy to drive, attracting admirers wherever we took it.

In March 2017 we sold it to a gentleman in Buckinghamshire, where it joined his regularly changing collection of classic and modern exotic cars. He has very much enjoyed owning and driving it, but now has a hankering for a new Ferrari, so we jumped at the chance to buy it back. It is now available to a new owner. As a model it drives and handles superbly, with very few concessions being necessary due to its age. The gorgeous straight-six engine provides smooth reliable performance via the four speed auto gearbox, and has absolutely no trouble keeping pace with modern traffic, and the steering, brakes and suspension are well up to anything demanded of them. It makes a perfect entrant to classic car tours and shows, or even a daily driver for those who like to make a statement with their mode of transport. Being over 40 years old it does of course qualify for free historic road tax, and is old enough to get into the classic car park at the Goodwood Revival.

We have carried out a comprehensive mechanical check in our own workshop. Any faults found have been remedied, and any required maintenance has been carried out. A schedule of this work will be supplied with the car, along with our own warranty, details of which can be supplied on request.

A brief stop at the old Reims Grand Prix Circuit

On the Laon trail with a sister ship