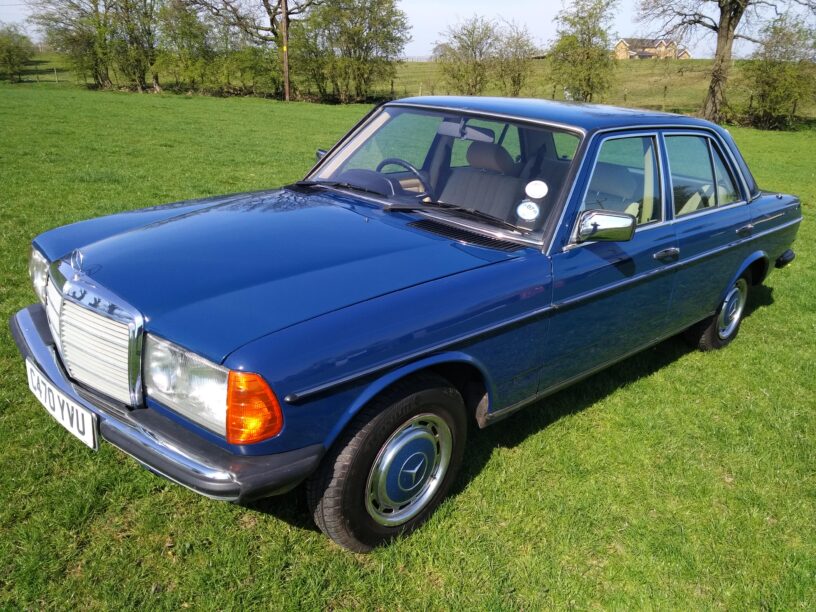 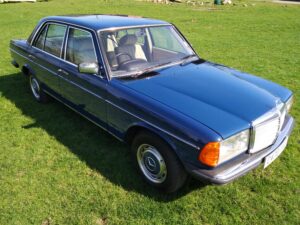 Unlike most 35 year old cars that have survived this long, this lovely saloon has always been shielded from the rigours of a hard life by being well garaged, well maintained and sympathetically used by only one owner for its entire life to date. As such it is very rare among Mercedes saloons, or cars of any make and model, and its quality is obvious from even a casual inspection. Another rare feature for a W123 model is that for its entire life it has been serviced exclusively by the Mercedes dealer who supplied it new and only one other independent MB specialist (see below).

It was supplied new by Portmann Mercedes-Benz of Manchester to a neonatology professor at St Mary’s hospital, Manchester, who eventually became medical director for the Central Manchester University Hospital NHS Trust. For the 21 years until his retirement in 2006 he used the car to commute the 20 mile round trip from his Altrincham home to the hospital and for social and domestic motoring. He was not a car enthusiast, but was the type of person who appreciated high quality items and knew how to look after them. 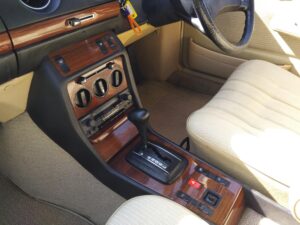 Servicing has been consistent and thorough, with no expense spared to keep the car in top mechanical condition. Until 2003 the car was looked after by the supplying dealer, with 23 of their service stamps in the book. In that year Portmann closed down as part of a major dealer re-organisation by Mercedes-Benz. One of their technicians, whom the professor had got to know personally (those were the days!) didn’t like the new regime and had already set up on his own as an independent MB specialist, as did so many at that time. That is where the car has gone for servicing until now, with a further 14 of his stamps in the book.

As well as the fully stamped service book the history file contains every service and repair invoice since shortly before his mechanic took over the servicing. We also have many old MoT certificates and the original new car order form and PDI certificate.

In the early years of its life, up to the professor’s retirement in 2006, the car covered a fairly regular 5-10,000 miles per annum. From then until 2014 this reduced to around 2-3,000, and in more recent years when the professor’s health was failing it reduced further to around 700. It is worth noting however that it has never been laid up, and has always been in regular, if occasional, use. This, together with the unstinting maintenance, has gone a long way to ensuring its overall excellent condition to this day. 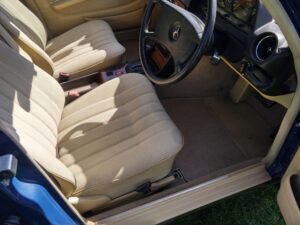 In 2019 the professor died, and in gratitude to his mechanic for looking after the car so well over the years bequeathed it to him in his will. The mechanic, who we know very well, had no real use for the car (and never registered it in his name) so we have bought it from him, on condition that it goes to a caring owner. He gave it a thorough service before we took it over, so it is now ready for a further 6,000 miles before any scheduled maintenance is due.

The car has been kept well garaged and regularly cleaned and polished, with the result that it still looks lovely. Paintwork and chrome are excellent and the interior is virtually unmarked except for some slight ‘bobbling’ on the cloth of the driver’s seat base. Several years ago the front wings were replaced and a few other bodywork areas attended to, all of which is holding up very well. There are a few other minor cosmetic blemishes, but even so we feel that it is still among the highest percentile quality-wise of the remaining W123 population. Being the smallest engined variant of the model progress is of course leisurely, bit it is a pleasure to drive and feels like a much younger car.