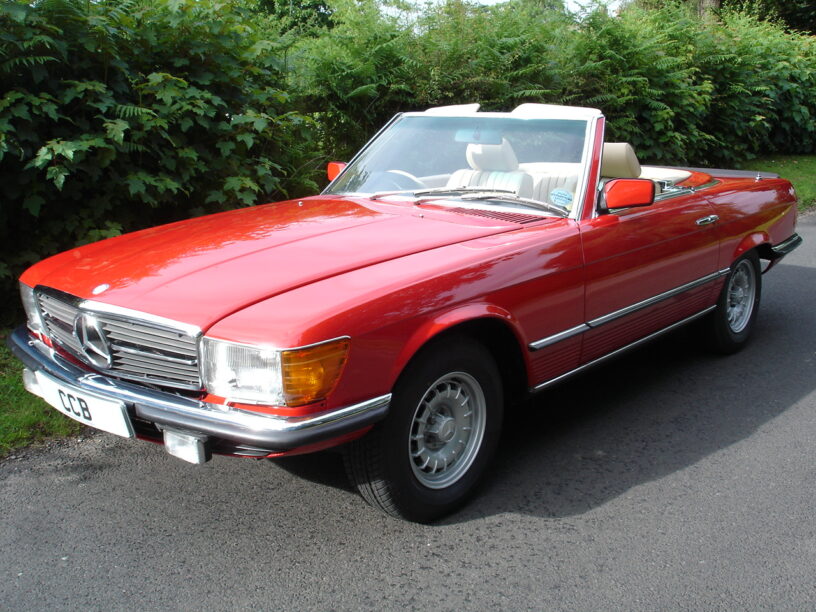 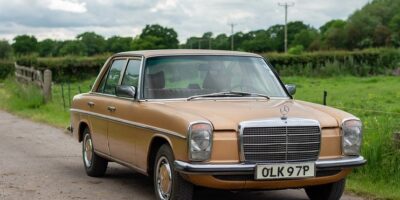 *The smaller steering wheel shown in the photographs has now been replaced with the original item, and the red mirror housings replaced with original chrome items, thus returning the car to original factory specification in every way.

This incredibly original SL in the much admired combination of red with cream interior looks almost as good now as when it emerged from the factory in 1985. Its condition is commensurate with its mileage, i.e. virtually as new. The paintwork, brightwork, chrome, wheels, glass etc. are all pristine, and the interior trim and soft top show only the lightest patina. It is without doubt one of the best quality R107s we have seen and it drives like a new car.

It is hard to believe that it is now 36 years old, and its rarity is compounded by it being one of the very last of the pre-facelift cars, with the classic appearance that had been unchanged since the model’s introduction in 1971, and being a 500, the most powerful engine offered in the UK market.

It was purchased new by an investor from Cheshire in June 1985 from Portmann Mercedes-Benz of Manchester, in the days when there were profits to be made from ordering cars that were in short supply and selling them on straight away. Within two months it had been resold via Strattons of Wilmslow to its first real owner, the proprietor of a medical software business in Glasgow, who kept it for 30 years until 2015 and drove it on average less than 1,000 miles per annum.

Although his name was on the registration document we understand that the car was a present for his wife. She apparently loved it, but found it a little ostentatious for driving around Glasgow, so only used it very occasionally. Fortunately they stored it carefully and ensured that it was maintained regularly and correctly, which resulted in it remaining in fabulous condition.

In 2015 we purchased it and supplied it to its latest owner, an elderly gentleman in South Wales. He has carried on the same gentle usage pattern during the six years he has owned it, but did manage to include a trip to a classic car event in Northern France (we spotted him on the Autoroute, what are the chances of that?!). In total he has only added 13,000 miles to the already modest tally, but has now hung up his driving gloves so the car is once more available to a new owner.

After a PDI by the supplying dealer the car was always serviced by Mercedes franchised dealers. with 11 stamps in the book up to 2006. This took it up to 26,000 miles and gave an average actual service interval of less than 2,500 miles, against the manufacturer’s recommended 6,000. Since then we understand that it had periodic oil and filter changes at the garage where it was taken for MOT, but these were not stamped. We brought the servicing right up to date with a service in our own workshop before sale to the latest owner, and he has carried on the same servicing regime. In addition to the servicing records we also have all MOT records back to 2007.

Values of this model have been climbing steadily over recent years, partly as a knock-on effect of the meteoric rise in prices of the earlier Pagoda model, and they show no sign of abating. This is unquestionably one of the very best examples remaining, and as such can be thought of as a blue-chip investment which is also a lovely thing to own and use.